:: These reviews were originally published
:: in Daniella Thompson on Brazil. 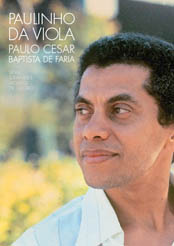 In 1980, Globo TV aired the series Grandes Nomes, which featured hour-long presentations by the flower of popular Brazilian music. The fourth show in the series was Paulo Cťsar Baptista de Faria, dedicated to Paulinho da Viola.

Paulinho is the glory of samba—its most elegant proponent, brilliant songwriter, and a singularly moving singer. Everything he does carries unimpeachable credibility and refined taste. He eschews all flash and artifice, homing in on the essential. No one else can be so authentically rooted and high-toned all at once.

The TV show Paulo Cťsar Baptista de Faria first aired in June 1980, when Paulinho, born in November 1942, was 37 years old. He had just emerged from his most productive decade, during which he released an album practically every year and sometimes two in a year, and had fifteen years of musical accomplishments to look back on.

Paulo Cťsar Baptista de Faria condenses those fifteen years into several chapters presented not as a documentary (for that, see Paulinho da Viola: Meu Tempo … Hoje, 2003) but as an evolving stage show.

Paulinho, all in white, opens the show in a solo performance, accompanied by his guitar and orchestra or percussion as the occasion requires. The three songs progress from the meditative “Sinal Fechado” to syncopated samba (“Coisas do Mundo Minha Nega”) and samba-canÁ„o (“Nervos de AÁo”).

In the second segment Paulinho, armed with a cavaquinho, calls to the stage his old buddies from the days of Rosa de Ouro and Os Cinco Crioulos: Elton Medeiros, Jair do Cavaquinho, Anescarazinho do Salgueiro, Nelson Sargento da Mangueira. Attacking on guitar, two cavaquinhos, and two tamborins, the five launch into a medley of the tunes they had sung seventeen years earlier, each singing his own composition.

Paulinho returns alone and, still on cavaquinho (his father Cesar Faria, plays guitar behind him) sings “Pecado Capital.” He could could continue alone forever, as far as I’m concerned, but “Aquela Felicidade” gains tenderness from the presence Zezť Motta in a lovely duet. Zezť follows with the warhorse “Senhora Liberdade,” with Paulinho accompanying on cavaquinho.

The next segment is devoted to instrumental music, hosting several great musicians who are no longer on the scene. The choro string begins with a a clarinet solo by Copinha (1910–1984) in Luiz Americano’s “Numa Seresta” and continues with the left-handed guitarist Canhoto da ParaŪba (b. 1928) in “Forrů do Xenhenhem.” Radamťs Gnattali (1906–1988) and Copinha bring the set to a close in “Sarau para Radamťs.”

Gnattali (who wrote the show’s arrangements with maestro Gaya) also accompanies Paulinho on piano in “CoraÁ„o Imprudente,” which serves as an elegant transition into the next segment, a roda de samba with the participation of the Velha Guarda da Portela, founded by Paulinho in 1970. There is nothing more delightful than watching Paulinho, dapper in a white linen suit, hat, and two-tone shoes, dance the miudinho, followed by the veterans of his escola de samba.

The show concludes with several sambas composed at Portela. Moving and uplifting is Manacťa’s rendition of his samba “Quantas LŠgrimas.” Casquinha, who looks and sounds like a stevedore, makes a powerful complement to Paulinho’s lyrical voice in their joint composition, “Recado.”

In a grand blue-and-while finale, Paulinho and the Velha Guarda da Portela belt out “Foi um Rio que Passou em Minha Vida.” In any other artist’s show, this would have been the final number. But not here. Paulinho, who could have ended with one of his own compositions. Instead, he pays homage to Portela’s founder, singing “Cantar Para N„o Chorar.” It’s the fitting conclusion to a stirring presentation.